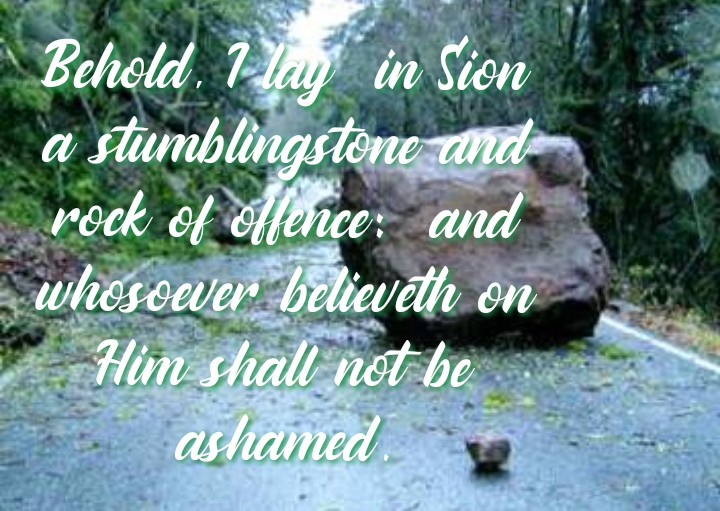 “JESUS CHRIST IS THE ROCK OF ALL SCRIPTURE”. HE is the “Rock Of Salvation” for those who ‘believe + nothing else’, and on which they stand.

HE is also the “Rock Of Offence” for those who believe not, and a “Stumbling Stone” to the man-made religious world.

For the very Person of Christ Jesus, nullifies religion with all it’s pride-filled legalism and renders it powerless.

YET, this “Rock Of Offence”, Jesus Christ is also the very cornerstone that holds all things together.

He is the “Rock” on which build we our lives on, which no devil can pull down.

We live in a world that would rather settle for the comfort of a lie than face the harsh reality of truth.

For it is only Truth that can ‘set free’ and which seems to be a rare commodity these days. And yet it’s there at hand if we truthfully want it!

But then, we seem to prefer a false sense of security in bondage than a seeming vulnerable insecurity in the path to freedom.

Such is our fallen mindset. Such is the messed up condition of our fallen human nature.

And the harsh reality is that we are a ‘defeated’ human race that does not want victory through the truth.

Oh we want to show that we are ‘man enough’, yet knowing deep down that we really are not.

So we must wear that “robe of pride” and that “garment of ego”. For without them, we’d be unable to hide and disguise our weak, feeble and fallen nature.

Israel was gloriously delivered from bondage from the hands of the Egyptian Pharaoh to the pathway of freedom.

During their journey to freedom, when faced with a tough situation, they wanted to go back to their place of bondage.

They just did not seem to ‘want to trust’ in the One Who delivered them.

The path to freedom has never been and will never exactly be an easy one.

It requires perseverance, patience and a trusting and believing heart.

Freedom and liberty has to be fought for. That’s the way it’s always been. It has never come easily.

Once having got our freedom and liberty, we then have to fight to maintain it in this fallen and perverse world.

And in order to preserve that freedom we need to be well equipped, especially with knowledge and understanding of our identity rights.

We need to have an absolute assurance of who we are and where we stand at any given moment in time.

WE NEED THE GOSPEL.

A Bold And Truthful Statement

“JESUS CHRIST made a telling, truthfully bold statement, that didn’t go down too well with the religious folks of His day”.

“For I say unto you….” He spoke with a categorical stamp of amazing authority in [Matthew 5:20].

“That except your righteousness shall exceed the righteousness of the scribes and Pharisees, ye shall in no case enter into the kingdom of heaven”.

All of man’s righteousness, be it of himself or his religion, are like “filthy rags” before God [Isaiah 64:6].

And the Biblical definition of a “filthy rag” is a discarded menstrual cloth.

Men are fallen creatures and there isn’t anything about us that can ever line up with the Righteousness of God.

And unless it does line up, we can never enter in or partake of the things of Heaven.

This is the reality of our spiritual predicament and is what can be termed as a ‘catch 22’ situation.

The answer is “absolutely nothing”, which leaves us at the mercy of a merciless devil.

And this devil, called Satan, continues to go to the uttermost promoting righteousness through a spirit of religiosity.

It all started back there at the Tower of Babel in [Genesis 11]. Is it any coincidence that ‘Babel’ means confusion?

This is the same devil that Jesus Christ called and still calls, “a liar and the father of lies” [John 8:44].

Religion is a lie!

Man’s righteousness has ‘no place’ in God’s programme, and there is nothing we can do about it.

The Good news is that God Himself has done something about it and that is what JESUS CHRIST is all about.

“Who then can be saved?” was the question directed back then at Jesus Christ.

“With men this is impossible; but with God all things are possible”.

The things of God ‘cannot’ be earned. They can only be given and imparted as ‘Free gifts’ and only a heart void of pride can accept that.

Religious pride will struggle to accept this truth and will find it a hard pill to swallow.

The reason being that religious pride has no place for humility before God.

But a humble heart has no problem with this.

In other words it’s higher than the righteousness of all religions on this planet put together.

And this Higher Righteousness is a ‘free gift of God’ that comes via the cross of Christ Jesus [Romans 5:17].

The moment we “believe”, by faith in Paul’s Gospel of Grace, God imputes His righteousness to us.

The moment we believe that “Jesus Christ died for our sins, was buried and rose again”, God declares us righteous.

God could legally do this, because His Son became our sin bearer and our total debt payer.

Scripture constantly and consistently stresses on this great liberating Truth.

“Abraham believed God”, is the probably the most powerful statement in all of Scripture.

For in the same breath, what did God instantly do?

Paul our apostle shows us in [Romans 4:23-24] something wonderful about this truth:

“Now it was not written for his (Abraham’s) sake alone that it (God’s Righteousness) was imputed to him”.

“But for us (that is you and I today) also, to whom it shall be imputed if we believe…..”.

Believe in Whom and in what?

“Believe on Him (God) that raised up Jesus our Lord from the dead”.

This is the “Gospel of our salvation” and is freely available for every man.

All that Abraham did was truly believe the promise that God made to him. That is all, and God immediately declared him righteous.

And the amazing thing is that God has not changed even one bit. He is still the same today as He was yesterday and will also be tomorrow [Hebrews 13:8].

Scripture here is testifying of the simplicity of God Almighty.

All that God wants and expects of us is “simply to be believed” and our eternal destiny gets instantly and irrevocably sealed.

Knowing this truth, do we really need a religion with all it’s “do’s and don’ts”?

What do you think?

Israel Has a Problem

Israel, the Jews had and still have a problem with us today. They have a hard time accepting that we become the “children of God” simply believing by faith, in the Gospel.

We don’t have to go through their religious Judaism.

Instead, we get to meet directly with the same God of Abraham, Isaac and Jacob at the cross.

And at that cross we get His Righteousness by faith.

“Even the righteousness of God which is by faith of Jesus Christ unto all and upon all them that believe”.

Notice how Scripture once again stresses on the “belief factor”.

For God has clearly declared, “for there is no difference” now between Jew and Gentile.

So Paul says that a Jew has to approach God on the same basis that we as Gentiles do.

SO, “What shall we say then?” fires in Paul once again.

That word “attained” is a great Word here. It’s God’s Word. For by just believing in the Gospel we have “attained” that Higher Righteousness of God by faith.

We did not have to follow or run after it. It came to us the moment we believed.

Whereas Israel, the Jews “which followed after the law of righteousness”, did not attain it [Romans 9:31].

And Paul is telling them their problem in [Romans 9:32], “Wherefore (why)? Because they (the Jews) sought it not by faith”.

Instead, they were trying to attain it “by the works of the law”. That is by their religious works, and God just would not have it.

For He sent His Son to the cross in order to give His Righteousness as a “free gift” by faith.

We’re not that much different today. About ninety percent of Christendom, use the Bible as their “rules of order”, are still living under a “Works Religion”.

Do this and do that, and then maybe God will accept you.

But Paul screams that it’s “not of works”, but it’s all “faith”.

God’s Righteousness by faith alone is what Scripture calls a “stumblingstone” to the Jews.

It’s the same with the rest of the religious world today with their so-called righteousness and fundamentals.

But God will not shift and let men twist His Arm.

For it is ONLY through JESUS CHRIST the “ROCK OF OFFENCE” that we must humbly come on bended knee.

For it is there and only there alone, where we get to embrace our eternal destiny.

This “ROCK OF OFFENCE” can either be our “Stumbling Stone” or “Stepping Stone”.

It must be by faith, for “without faith it is impossible to please God” [Hebrews 11:6].

Paul, the apostle of the Gentiles concludes the matter with an open invitation to all men in [Romans 9:33]:

“As it is written, Behold, I lay in Sion a stumblingstone and rock of offence: and whosoever believeth on him shall not be ashamed”.

“From the end of the earth will I cry unto thee, when my heart is overwhelmed: lead me to the rock that is higher than I” [Psalm 61:2].

We trust and hope you have found this series beneficial. If you have any questions, please let us know in the comments section below. We ‘will’ get back to you.