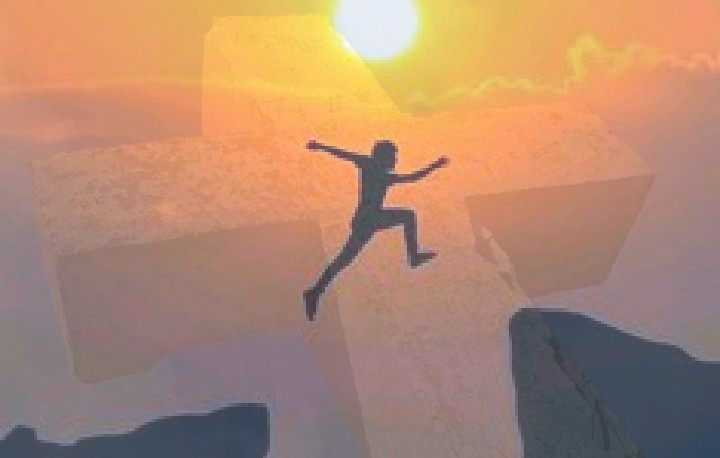 “This current ‘Age Of Grace’ we are living in today, is the final step beyond the cross”.

It is here ‘Beyond The Cross’ where God is residing and expressly dealing with the entire human race today.

HE is not residing in the Old Testament parchment scrolls any more.

Neither is God residing in the four gospels of Matthew, Mark, Luke and John.

This will no doubt throw a ‘BIG CURVE’ at many.

But the fact is that God, after having ‘finished’ what HE came to do on the cross, ‘MOVED ON’.

‘Twas ‘on the cross’ where the dying Jesus Christ triumphantly echoed the Words of Heaven, “IT IS FINISHED” [John 19:30].

And so must we, by faith, move on, in order to stay effectively in sync with His final move.

GOD moved on to the place, the age or the ‘dispensation’ of where we are today.

Hence Scripture has named this period in God’s historical timeline as the “The Dispensation Of The Grace Of God” [Ephesians 3:2].

This is also what we today call, the “Age of Grace”, without doing any violence to Scripture in any way whatsoever.

This entire concept is vitally important, which we must understand, lay hold of, embrace and not let go.

Where we are today is God’s final dealing with fallen man, the fallen human race.

And this dealing is embodied with all the fullness of His Mercy and Grace, which HE instituted two thousand years ago.

God’s Mercy and Grace was poured out in untold measure on the entire human race through the cross.

And on that same cross, the fullness of God’s wrath was simultaneously being poured out on His Son Jesus Christ.

The Wages Of Sin

JESUS CHRIST was paying our sin debt, “the wages of sin” [Romans 6:23] on the cross.

The writer of [Hebrews 2:9] tells us that Jesus Christ did “taste death for every man”.

We can never comprehend what it would be like to be forsaken by God and taste death.

Hell and the lake of fire is the only place for tasting that death.

The only way that would be possible would be by rejecting Jesus Christ and his finished work on the cross.

And that would mean rejecting the “Gospel of Grace”, which none of us really should want to do.

“How can we neglect so great a salvation”? Scripture puts the question to us in [Hebrews 2:3].

Jesus Christ, God’s Son was hanging between heaven and hell on the cross while all this was taking place.

He was not hanging by a rope, but by vicious, solid iron nails mercilessly driven through His hands and feet.

That’s where it was all declared finished, as that era ‘under the law’ would now begin its transition to the ‘Age of Grace’.

The Time Of The Gentiles

The time of the Gentiles was now at hand as God starts to wind down His dealings with Israel.

HE will pick up where He leaves off with them on a set day in the future. But for now, they must be ‘set aside’.

They had been a stubborn, murmuring and ‘stiff-necked’ people all throughout their history, and were still resisting the Holy Spirit.

And these attributes of Israel were the theme of that final sermon that God gave them through Stephen in [Acts 7].

HE was giving them one final opportunity.

Jesus Christ was raised from the dead and His resurrected appearance was categorically eye-witnessed by many according to [1 Corinthians 15:4-8].

Then forty days later He ascended to Glory as vividly described in [Acts 1:9-11]. And having ascended to heaven, He now ‘positionally’ sits at the Right Hand of God.

Then from that place of position, HE sends the Holy Spirit on the ‘Day of Pentecost’ as promised.

Peter is on fire and preaching his heart out to Israel in a bid to save the entire nation.

They could still have that promised “Kingdom of Heaven” on earth. If only they could even now, nationally recognize Jesus Christ of Nazareth as their promised Messiah.

However, salvation had to come first.

But according to the Jews, “could any good thing come out of Nazareth” [John 1:46]?

Though Peter did not know it at the time but his mission regarding Israel’s salvation was ‘not’ going to succeed.

But in His Sovereignty and Just nature, HE must let men and nations exercise their own free will.

This was according to the protocol of His creation of man “in His Own image”.

How wonderful HE is, as in never infringing on the free will of man.

Israel blatantly displayed their willful and scornful rejection of God’s final call for salvation by brutally stoning Stephen to death.

This was indeed Israel’s final act of rejection concerning Jesus of Nazareth their Messiah.

Referring to Stephen’s closing remarks, [Acts 7:54] says, “when they heard these things”, they were cut to the heart”.

It literally sent those Jewish religious leaders into frenzy, “and they gnashed on him (Stephen) with their teeth”.

Was this gnashing ‘figurative’ or ‘literal’? Either way, the fact is that this was a ‘high-level’ national and scornful rejection.

“We will not have this man to reign over us”, was their attitude, as foretold by Jesus Christ in [Luke 19:14].

Israel did not just reject Jesus Christ, but they rejected the entire Godhead by now.

All three Persons of the Godhead were present at this stoning event of Stephen in that one verse [Acts 7:55].

“But he (Stephen), being full of the Holy Spirit, looked up steadfastly into heaven”.

And the Bible tells us that he “saw the glory of God, and Jesus standing at the right hand of God”.

And now Stephen makes a statement in [Acts 7:56] that triggers a violent reaction from those religious hearers.

“Behold I see the heavens opened, and the Son of man standing on the right hand of God”.

When they heard that they literally plugged their ears with the palm of their hands and “ran upon him with one accord” [Acts 7:57].

Then they brutally stoned Stephen outside the city gates.

Not only was that the end of Stephen, it was also the end of God’s final opportunity for the nation of Israel.

An era had come to a close.

A Fork In The Road

We now need to see how definitively the Scripture points out that there is this fork in the road here.

Up until this point God has been dealing with His covenant people, the nation of Israel.

The Jews have rejected the appeals of both Peter and Stephen.

AND NOW GOD DOES SOMETHING TOTALLY DIFFERENT.

HE now shifts His focus from Israel to the Gentiles.

And HE raises up ‘Saul of Tarsus’ to be ‘Paul the apostle’ to the Gentile world.

A surprise move? To the Jews, yes it was. But to God, no.

This was already planned and kept secret in the mind of God before the world began [Romans 16:25].

God starts to set His plan and his final move in motion.

Saul of Tarsus is being dealt with just outside the city gate, and the ‘Ascended Lord’ has appeared to him.

And this encounter which took place on ‘Damascus Road’ was on ‘Gentile ground. This was no coincidence.

The twelve that Jesus chose after a whole night on His prayer mountain were within Israel’s borders, on ‘Jewish ground’.

Divine providence and purpose was behind this move of God and Saul of Tarsus was a marked man by heaven.

BUT NOW, in [Acts 9:10-15] the Lord appears to this Jew who was one of the leaders of the synagogue in Damascus. Ananias was his name.

Now the LORD instructed Ananias to go and lay hands on Saul that he may receive his sight back.

The crashing encounter with the LORD JESUS CHRIST had left him blind for three days.

Ananias tells the Lord, “I have heard by many of this man, how much evil he hath done to thy saints at Jerusalem:”

Saul was persecuting the Jewish believers in Christ Jesus. He was putting them in prison and putting them to death if possible.

This Sanhedrin’s ‘blue-eyed boy’, had the authority, the power, and the backing to do so.

The Other Side Of The Coin

“Go thy way: for he (Saul of Tarsus) is a chosen vessel unto me, to bear my name before the Gentiles,…”

Saul of Tarsus, this fanatical Jewish religious zealot, had set out to arrest those believing Jews.

However, while on the way, Jesus Christ arrests Saul.

That ‘Road to Damascus’ encounter was Saul of Tarsus’ initiation and commission into Heaven’s service.

He would have to suffer many things for Christ’s sake in order to be faithful to his calling.

Moses, who was ‘entrusted’ with the ‘Dispensation of the Law’ was found faithful by God according to [Hebrews 3:2].

AND NOW, Jesus Christ was going to entrust Paul (Saul of Tarsus), with the ‘Dispensation of God’s Grace’.

“The eternal destiny of the entire Gentile world, at least for the next two thousand years, was at stake here”.

The witnesses at Stephen’s death in [Acts 7:58], “laid down their clothes at a young man’s feet whose name was Saul”.

“God had just introduced the next major player on His stage with regard to His dealing with mankind”.

“PAUL THE APOSTLE OF THE GENTILES”

Join us on this exciting journey as Part #2 follows shortly.