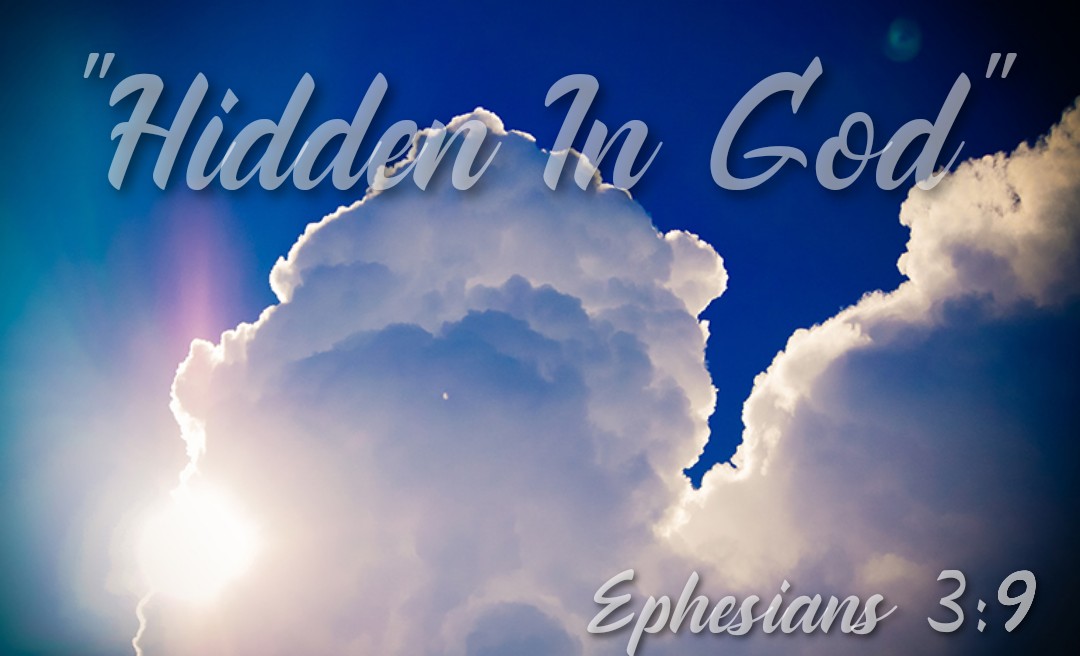 “One Lord One Faith One Baptism” is the culmination of a four-thousand- year journey that began at creation in Genesis.

This amazing statement is one that is of the ‘Higher Doctrines of Grace’ Paul the Apostle writes in [Ephesians 4:4-5].

And whatever this Apostle of the Gentiles writes, is only by ‘direct revelation’ from the Ascended Lord Jesus Christ in Glory.

We have no problem with ‘One Lord”, for it refers to the ‘one and only Lord Jesus Christ’.

And we certainly don’t have an issue with ‘One Faith’, for it speaks of faith in this ‘One Lord Jesus Christ’.

However, when it comes to ‘One Baptism’, endless controversies, arguments, debates and confusion have mushroomed and risen.

And yet ‘One’ means just what it means, which is ‘One’, and there is certainly nothing confusing about that.

They say there are seven types of Baptisms in the Bible, which is a topic for another day.

But here, we are dealing with the two relevant Baptisms, which are ‘Water’ and ‘Spirit’.

And these are the ones which a believer is most familiar with.

We are certainly not like that small group of people in [Acts 19:2], who Paul the Apostle confronted.

“We have not so much as heard whether there be any Holy Spirit”, they told him.

These baptisms of water and Spirit are relevant because they deal with the eternal salvation aspect of our lives.

Keep in mind, that the same ‘One Lord’, in Whom we have that ‘One Faith’, says that there is only ‘One Baptism’.

But yet, here we are today faced with two, water and Spirit.

And we shouldn’t be, if what the Lord said is right, and we know He is always right.

What we need to understand and come to terms with, is that the the two Baptisms, each belong to a different set of circumstances.

So, what are we saying here?

There has always been only ‘One Baptism’, so there is really no confusion at all.

It’s just that each of the ‘One Baptism’ belonged to its own group and own set of circumstances.

One was under the Law, while the other is today, under Grace.

And herein lies the problems that we have today, and the reason for them.

The real problem is not a ‘Water-Spirit’ one, but a ‘Law-Grace’ one.

And it is from this refusal, that stems just about all the internal problems and confusion Christendom has today.

Remember what Sarah told Abraham and which Paul by inspiration and revelation, brings up in [Galatians 4:30]?

“Nevertheless what saith the Scripture?”

See how God is constantly reminding us to pay heed to what the Scripture, and not what men are saying.

“Cast out the bondwoman and her son”,  speaking of Hagar and Ishmael, who symbolically represent the Law.

Therein lies a strong message from the Holy Spirit, that ‘Law and Grace’ will not be permitted to mix.

And Christendom for the most part, has not paid heed to this, resulting in untold confusion and division.

Although there is no difference between Jew and Gentile today, prophecy and mystery do not mix.

Each was a separate program altogether, which God at some point in the eternal future, will bring together [Ephesians 1:10].

Everything pertaining to the nation of Israel, was ‘under the Law’.

And everything that pertains to the Church, the Body of Christ, is ‘under Grace’.

All the higher Doctrines of Grace, though accomplished on the cross, were ‘kept hidden’ till revealed to the Apostle Paul.

And Paul tells us that they were kept ‘hidden in God’ from the beginning of the world [Ephesians 3:9].

It is no coincidence that the word ‘mystery’ is never used even once in the entire Old Testament Scriptures.

James, Peter and John do not use the word ‘mystery’ in their epistles either, for they are addressed to the Jews.

Whereas, the Apostle Paul alone, uses the word ‘mystery’ on no less than seventeen occasions in his epistles.

Now that alone speaks volumes and should tell us something!

God waited till the nation of Israel reached the pinnacle of their rejection of their foretold Messiah, the Nazarene, Jesus Christ.

The stoning of Stephen the martyr to death outside the city gates of Jerusalem was the culmination of it all.

It had been seven years since the death, burial, and resurrection of Jesus Christ.

Peter and the other apostles preached their hearts out to this ‘stiff-necked’ Jewish nation, with all signs wonders and miracles.

Being the extended arm of Jesus Christ, they carried on where He left off, and were empowered to do so.

They had been baptized by Christ Jesus with the Holy Spirit, according the promise God made to them [Acts 1:4-5].

This empowering Baptism with fire, as spoken of by John the Baptist in [Matthew 3:11] was accompanied by visible manifestations.

The sound of a rushing wind and cloven tongues of fire settling upon each one of them in the upper room.

Jews from across the then known world, had gathered together in Jerusalem to celebrate this feast day of Pentecost.

And then all of a sudden, they heard the sound of praises coming forth from the lips of these Galilaeans.

“How are they able to speak in our native language wherein we were born?”

Something was happening and something was about to change, for the appointed day and hour had arrived [Acts 2:16-18].

Joel their minor prophet had prophesied of this day and event, and it was happening right before their very eyes.

They would do nothing nor believe anything, unless confirmed by a sign.

They were the ‘faithless generation’ according to Christ Jesus in [Luke 9:41].

And here they had three of them; wind, fire and tongues.

And these tongues were ‘known languages’, and not the unintelligible gibberish we hear today.

Acts 2:8-11, categorically confirms this and even gives us the list of languages that were being spoken in.

And this was a supernatural act of God, absolutely it was and we dare not take anything away from it.

But this was all happening, ‘only for Israel’, and NOT for Gentiles.

Gentiles don’t even come into the picture at this stage, according to God’s scheme of things.

God had a purpose behind all this that was taking place.

And that was to give Israel every opportunity to recognize that the One Whom they crucified was indeed their Messiah.

“Now repent of that and be baptized”, not just some, but “every one of you, in the Name of Jesus Christ”.

The whole nation had to repent and be baptized, “for the remission of sins”.

And then they could receive the Holy Spirit the same way as the others did.

And that Holy Spirit Baptism, by ‘Christ the Baptist’ now, would be evidenced by speaking in another ‘known language or languages’ called tongues.

This was exclusively for Israel and ‘NOT’ for the Body of Christ Church, which in fact, did even come into the picture at that stage.

How in Heaven’s Name did the Pentecostals and Charismatics and others manage to stake claim to this for their own?

“Repent and be baptized for the remission of sins” was for Israel “under the Law”.

Today, ‘under Grace’ it’s “believe that Jesus Christ died for your sins, was buried and rose again”.

Repentance and Baptism are not even mentioned here.

What a difference between the two and how clearly 1 Corinthians 15:1-4, shows us that.

Does this shock you? Well, this is “what saith the Scripture”, and not men.

It’s the difference between ‘Truth and Tradition’, and we must choose, what it is we want.

There is this nasty spirit within Christendom that is always setting Peter against Paul.

And these come primarily from the religious legalists, who don’t really want to give Paul the time of day.

For a start, Paul disturbs their theology and shows them up for what they are.

Secondly, many feel that Peter was the ‘leading figure’ of the twelve, while Paul wasn’t part of the twelve at all.

So, it’s an ‘attitude problem’.

“Paul wasn’t the only one who preached Christ’s death burial and resurrection”, they say, “Peter also preached the same”.

Well of course he did, and we are not denying it at all!

Absolutely, Peter did so do exactly that!

After all, His message to Israel was, “the One you crucified, God raised from the dead”.

Peter could not give that message if he wasn’t preaching the death, burial and resurrection.

But what these lovely folks within Christendom, ‘don’t want’ to understand is this:

Peter wasn’t preaching the death, burial and resurrection as the means to salvation.

That had not been revealed as yet, not till about 7-8 years later to the Apostle Paul.

It was ‘Hidden in God’ till then, as we have seen.

They were called to recognize and believe, ‘who JESUS CHRIST really was’.

“Thou art the Christ, the Son of the Living God”, was Israel’s confession of faith unto salvation [Matthew 16:1].

Peter was preaching death, burial and resurrection to Israel to call them to a national repentance.

Then, and only then could God fulfil His prophetic promises, and set up that Glorious Millennial Kingdom on earth.

And though rejected then, it will yet happen at an appointed time out in the future.

Israel will yet have her King and the Kingdom.

Israel Still Under The Law

Though all this that was taking place, was post Christ’s resurrection and ascension, God was still dealing with Israel, ‘under the Law’.

The Temple with its practices, system of worship and animal sacrifices were still going on in full swing.

And rightfully so, nobody had told them to stop it because it was no longer valid.

And God is continuing to press through with little Jewish nation, giving them every opportunity to have that promised Kingdom.

Even though God knew, that Israel would still eventually reject the message, it was yet a ‘valid offer’.

And when that final rejection came, being displayed through the stoning of Stephen, what was very next thing God does?

HE raises up the Apostle Paul of the Gentiles, and the transition to that foreordained and predestined change begins.