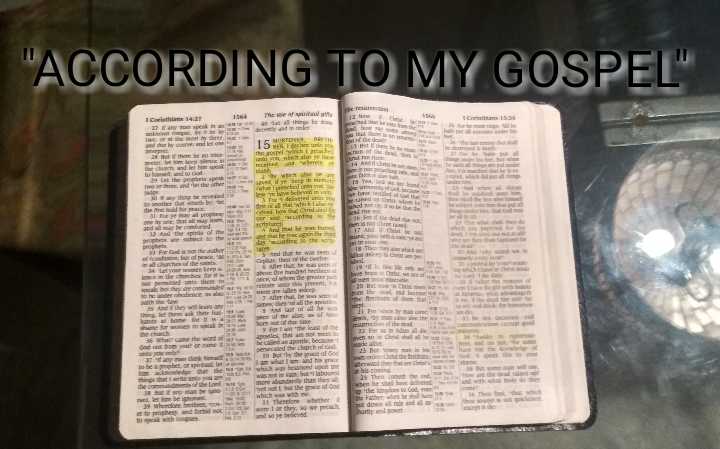 “WHEN We Stand Up And Proclaim Paul’s Gospel, It Is Because This Is What GOD Has Mandated”.

‘Paul’s Gospel’ is indispensable and anybody that slips out into eternity with less than Paul’s Gospel for their Salvation is in trouble.

For everybody on this planet, youngest to the oldest, ‘will’ slip out into eternity without question, and there is no telling when.

And after that there will be judgment, for Scripture in [Hebrews 9:27] makes this crystal clear with no compromise whatsoever.

“It is appointed unto men once to die, but after this the judgment”.

As we read this let it sink in that, “our death has already been appointed”.

This is not to be taken lightly, for each day brings us closer to that appointment, followed by judgment.

‘Judgment’ is a word that no one likes to hear these days and wants to know about.

The world at large have “stopped their ears” and brushed it under the carpet.

But for how long are we going to run?

Because this ‘Judgment’ appointment too, like death, is also inevitable.

So we might as well face it and deal with it ‘RiGHT NOW’, for tomorrow could be too late.

This is one thing we really “DO NOT” want to procrastinate.

For it is “according to Paul’s Gospel” that men will be judged [Romans 2:16]

According To My Gospel

“In the day when God shall judge the secrets of men by Jesus Christ according to my gospel”.

This verse in [Romans 2:16] is a verse that pretty much stands by itself.

Notice the word “shall” which is a ‘future tense’.

SO GOD won’t be the judge ‘until’ (that’s future) the ‘Great White Throne’ day.

What does this tell us?

That GOD is ‘NOT’ judging today, contrary to all that we have heard and are still hearing.

God today is still a ‘Saviour’ and not a Judge.

For we are still living in the ‘days of GRACE’ and not ‘Judgment’.

So “while it is still called Today; lest any of us be hardened”, let’s lay hold of this Amazing Grace [Hebrews 3:13].

FOR, when that Great White Throne day arrives, God will ‘no longer’ be the Saviour, but the Judge.

AND what is God going to judge?

The Secrets Of Men

This is pretty much self-explanatory.

What are “the secrets of men”?

The very thought processes of an individual.

What is his faith based on? With what is he going into eternity?

Those are the secrets of men that Paul is referring to.

Let’s look at it again.

“In the day when God shall judge the secrets of men by Jesus Christ according to (Paul says) my gospel.”

We need to think about that!

We need to wake up at 2 o’clock in the morning and think about it.

What is going to be the basis of Christ judging lost humanity?

What did we do with Paul’s Gospel?

And that’s why we stand up unashamed and proclaim Paul’s Gospel, because this is what people have to hear.

What is Paul’s Gospel?

Yes, that Christ was the Son of God.

That’s what the early part of the book of Hebrews is all about.

He’s the Son, He’s the Creator of everything.

But He took on human flesh and He went the way of the Cross.

He suffered, He died, He shed His blood, He was buried.

And then He arose again the third day to satisfy all the demands of a Holy God!

And all we have to do for salvation is truly believe that with all our heart.

This is Paul’s Gospel.

‘Twice’ in all of human history, God did something that was so perfect.

It was so perfect that He couldn’t add one thing to it.

And because it was perfect, He sat down.

The first one was at Creation in Genesis 1.

The last verse in [Genesis 1:31] says that God looked at all that He had created and made and it was “Very good”.

There wasn’t a thing wrong or out of place that God could correct.

So when we get into chapter 2 of Genesis, what did God do?

When we come down towards of end of verse 3, look at what it says:”

“When He (Jesus Christ) had by himself purged our sins, SAT DOWN on the right had of the Majesty on high”.

Well why did He sit down?

Because everything was so perfect!

God could not add one iota to that work of the cross. It was perfect!

And then He offers this “perfect finished work” to the human race, through the Apostle Paul.

And what does the human race say?

And this is so prevalent within Christendom that someone actually called it ‘Christendumb”.

And that’s why God is so displeased with that kind of unbelief.

“This we will do, if God permit”

Where Angels Fear To Tread

Now here is that portion of Scripture where even angels fear to tread.

For they are “hell fire” Scriptures.

This is an area of Scripture that has probably caused more questions than any other Scripture in the entire Bible.

Mostly because so many have totally ground this Scripture up so badly to where it doesn’t mean what it’s supposed to mean.

But it is a tremendous warning!

NOW to make it clear, Paul is addressing the Hebrews, who are still hanging on to their old religion.

BUT yet, we as Grace believers today, can take the same warning.

There are a lot of preachers out there who are misleading people from their pulpit.

They are telling people that these verses teach that you can be saved today and lost tomorrow.

And then you can get saved again and you can get lost again, however many times that your lifetime will permit.

We say to you, “don’t you believe one word of it!”

“Salvation is a one-time event.”

You’re either saved or you’re not.

And for those who are not saved, it’s a warning.

And here is the warning:

It Is Impossible For Those [Hebrews 6:4]

“For it is impossible for those who were once enlightened, and have tasted of the heavenly gift, and were made partakers of the Holy Spirit.

Let us spend some time on this vitally important piece of Scripture.

What is this Scripture telling us?

That there is a possibility for an individual to be enlightened by the Holy Spirit to open their understanding.

They may even have an emotional experience and may walk down the aisle.

They may also do all the various things that churches and denominations require of them.

BUT they never took it on hook, line and sinker!

They never truly laid hold of it and embraced it.

Now, we’ve got all kinds of examples in Scripture.

The prime example that Scripture uses, especially in the Book of Hebrews, is when Israel had arrived at Kadesh-Barnea.

This entire episode is graphically recorded in [Numbers 14].

Here Israel have just come away from Mount Sinai, and they now have the Tabernacle, the Law and the priesthood.

They have everything ready and God has promised the “land of milk and honey” which is out in front of them.

All they have to do is go in and occupy.

It’s all ready for them.

The fields and vineyards are producing, the pastures are productive, and the water is flowing.

And God said, “It’s all there for you, and I’ll push the Canaanites out. I’ve used them for the last four hundred years to get it all ready for you”.

That is how God works. And so He does this with Israel.

God got it all ready and then told them, “I’ll drive the Canaanites out, and don’t you worry about them. I’ll use hornets if I have to”.

“You won’t have to lift a sword, just go in and occupy.”

There it was all laid out for them.

They could have just gone in and had it!

But instead what did Israel do, ‘in unbelief’?

They wept all night because they couldn’t do it.

After seeing all the signs, wonders and mighty miracles that God had performed right before their very eyes, they did not believe Him.

What could have been a greater sign, wonder and miracle than the parting of the Red Sea?

They walked through it as on dry land, and then watched their enemies consumed by it.

But yet, they made all kinds of excuses, and worse than that, this is what they said in [Numbers 14:3-4]:

“And wherefore hath the Lord brought us unto this land, to fall by the sword, that our wives and our children should be a prey? were it not better for us to return into Egypt?”

“And they said one to another, Let us make a captain, and let us return into Egypt”.

“Let us return to Egypt?”

After all that God had done and shown them.

And what did God call that?

And it’s the same way with so many people who are approached with the message of salvation.

They may have an emotional upheaval.

They may have gotten a touch of the enlightenment of the Holy Spirit.

But they don’t take it! They reject it.

They turn around and they say, “Thanks, but no thanks”.

And in Christ’s earthly ministry [Mark 4:3-20], this is what the parable of the sower and the seed is all about.

‘Reuben Archer Torrey’, a great evangelist of the by-gone days, made this statement:

“That there is an enlightenment of the Spirit that does not lead to regeneration”.

That’s exactly what Paul is addressing here in these verses in Hebrews.

These Jews had been steeped in their religion.

“They had considered Paul’s Gospel but they would not embrace it.”