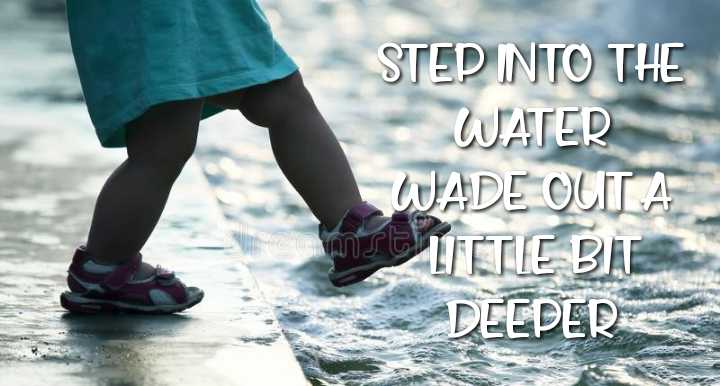 “STEPPING INTO THE GRACE OF GOD” Is Heavens Personal Bidding To Every Single Person On This Planet Without Exception”.

“Stepping into” is ‘living action’ that is an invaluable and indispensable part and parcel of our entire lives.

As we move on, or rather ‘press on’ in life’s journey we are constantly faced with decisions of “stepping into” something or the other.

‘Doors of opportunity’ makes no sense, and are null and void without the action of “stepping into”.

For without “stepping into” something, there will never be progression, growth and invaluable experience.

Instead, on the other hand, there will the possible horror and tragedy of the consequences of stagnancy.

It is by far one of the worst places anyone can be in.

No doubt, “stepping into” needs courage and boldness more often than not.

And before we can have and exercise that courage with boldness, we first must have the fundamental knowledge and understanding of what we are stepping into.

“Wisdom is the principal thing; therefore get wisdom: and with all thy getting get understanding” [Proverbs 4:7].

“Check it out” is the contemporary phrase that is most commonly used.

“Taste it” is the other phrase that is often used which is a wonderful Biblical one.

So having tasted it or checked it out for its goodness and potential, we then fully embrace it by stepping into it.

And we do so without any half measures, it is a ‘total embracing’.

“O taste and see that the Lord is good” is Heaven’s invitation in [Psalms 34:8]. “Blessed is the man that trusteth in him”, is the result.

Before we progress further, let’s briefly recap on what went before this article in this series “WHERE ANGELS FEAR TO TREAD”.

We touched on some basic fundamentals of Scripture and the indispensable apostleship of Paul for this Age of Grace.

And we understood that we are no longer “under the Law” but “under Grace”.

We saw how even Peter confirmed this indispensability of Paul’s apostleship, exhorting his fellow Jews to stay with Paul [2 Peter 3:15-16].

Then through this same Scripture we deduced in [Crumb 0080], that it was possibly none other than Paul who authored this letter to the Hebrews.

We saw how Paul is trying to convince these Jews that what they had was ‘good’, but now what Christ had accomplished is “better”.

Then following in the last [Crumb 0081], we see Paul admonishing them to ‘get off the fence’.

He tells them get off the ‘milk’ and get into the ‘meat’ of God’s Word and grow up, so that they can be ‘teachers of the Word’.

He is exhorting them to cut the aprons strings of their Judaism and step into this whole concept of God’s Grace.

To do so by leaving “the word of the beginning of Christ”, speaking of His earthly ministry found in Matthew, Mark, Luke and John.

And ‘by faith’ to step into Christ’s higher doctrines of Grace.

Although written primarily to the Jews, we see how much there is for us also to understand and lay hold of.

How that we too, also need to ‘cut a few apron strings’ and come to terms with the absolute, indispensable and authoritative apostleship of Paul.

It truly is indeed, the greatest need of the hour.

No Laying Of The foundation Again

If we’re going to build a house and we’ve got a foundation laid, what are we going to do?

Of course we are going to start building on it.

We’re not going to uproot it and lay another one.

But that is what these Jews were doing.

They were trying to tear up the old foundation of the Kingdom Gospel and just go back where they were before.

They were still so steeped in the Judaism of the past.

These Jews had recognized Jesus Christ and His Messiahship.

They had believed Who He was and had embraced the Gospel of the Kingdom.

But that is as far as they had gotten.

And now Paul is trying to move them to progress towards this further revelation.

This revelation, which is not just for Israel, but for the whole human race, Jew and Gentile alike.

The two are totally different.

HE shed His blood, was buried three days and three nights in the tomb, and arose victorious over everything.

This is the Gospel of the Grace of God.

And now this Sovereign, irrevocable and Judicial act of God makes it possible for anyone to become a believer.

Not just Israel, not just the Gentiles, but rather, the whole human race.

That God in His Great Mercy has seen fit to save those who ‘simply believe’ – without works.

So Paul is now saying, you’ve come through these ‘words of Jesus’ in His earthly ministry establishing ‘Who He was’.

How that HE fulfilled all the promises that had been confirmed “unto the fathers” [Romans 15:8].

When Israel rejected and crucified their Messiah, in reality, they were just simply fulfilling the ‘Sovereign blueprint of God’.

“Christ had to die. He had to go to the Cross.”

But nevertheless, God made a genuine, ‘valid offer’ to the Nation of Israel to accept the King and the Kingdom.

Heaven’s system of operating is way beyond human comprehension.

God knew that they wouldn’t accept His valid offer.

And in God’s incomprehensible wisdom, this crucifixion brought about our ‘Gospel of Grace’.

So now, Paul saying to them, “don’t stay on just that foundation”.

“Don’t try to tear it up and build another one, or don’t try to put another foundation on top of that one”.

SO, what did this foundation that Paul the apostle is asking these Jews “not to lay again”, consist of?

I) Repentance from “dead works” and “faith towards God”

‘Dead works’ is strong language here, and it’s being coupled with ‘faith towards God’…… WOW!

‘Faith towards God’ has been common to every dispensation since creation.

It is one of the two ‘absolutes’ of Scripture, for “without faith, it is impossible to please God” [Hebrews 11:6].

This ‘old foundation’ had to have ‘works’ attached to ‘faith’.

For “faith without works” was considered “dead” according to the New Testament legalist James in [James 2:26].

And indeed, so it was “under the Law”.

BUT NOW, after the cross, “faith with works” is dead.

For God categorically ‘WILL NOT’ accept works of any kind as far as our personal salvation is concerned.

It is “Faith + Nothing” in the finished works of the cross.

Jesus Christ took care of the “works” for us and became our blood sacrifice for the “remission of our sins” [Hebrews 9:22].

II) “Of the doctrine of baptisms”, and of “laying on of hands“

‘Water Baptism’ was part and parcel of the Jewish background.

They had practiced washings all the way up through their national history.

When John the Baptist came on the scene and demanding water baptism, that wasn’t anything frighteningly new to the Jew.

They did not question it, “Well, what is this?” It was just another form of washing.

The ‘laying on of hands’ was also part and parcel of the Levitical priesthood and everything else.

III) “And of resurrection of the dead” and “eternal judgment“

We don’t hear that much about eternal judgment anymore do we?

The world doesn’t even think or wants to think about the eternal judgment that’s coming.

How long is eternity?

As long as God lives!

That should make people think, but does it? That’s the big question.

And where in eternity?

That’s up to the individual.

It is either in bliss and glory or eternal doom.

SO all these were the very tenets or the precepts of the ‘Gospel of the Kingdom’ that Jesus and the twelve proclaimed to Israel.

And now Paul says, “these are of little relevance now, they don’t count any longer, it is in the past”.

“Leave behind these doctrines of baptisms, laying on of hands, repentance from dead works and resurrection of the dead”.

“Don’t lay again that foundation, we have got something better”.

“So let’s move on and really step into this blood bought Grace of God”.