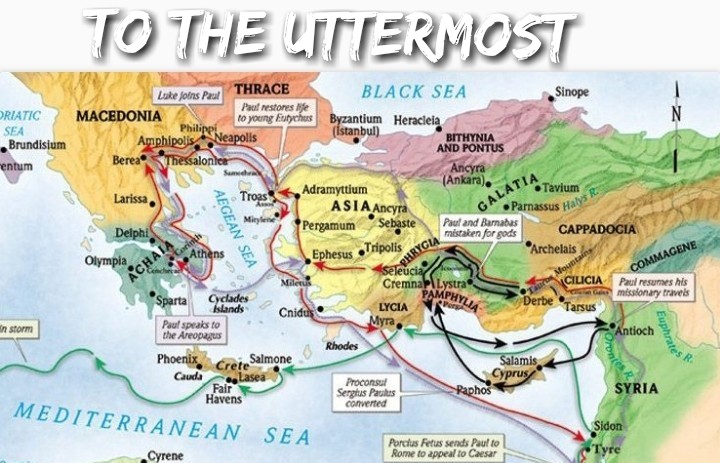 “The Great Commission or The Grace Commission?” They are not the same for there is a vast difference between the two.

‘The Great Commission’ is a coined phrase that has become increasingly popular in Christendom since it’s inception over the last two thousand years.

The BIG question being asked as the light dawns on pockets of Christendom the world over is, “what exactly is our commission”?

Let’s check it out!

Jesus Christ has risen from the dead and during this forty-day period, He has His eleven disciples around him. Remember, Judas Iscariot is no longer there, hence just the eleven.

“And Jesus came and spake unto them, saying, All power is given unto me in heaven and in earth”.

Now HE is going to give to them their mandate or their ‘commission’. This mandate wasn’t just for them, but for the entire nation of Israel.

They were to be the “chosen generation, a royal priesthood, an holy nation, a peculiar people (of intrinsic value)”.

Peter the apostle to the Jews in his epistle to them in [1 Peter 2:9], tells them so.

He is recalling and reminding them of that which the LORD spoke through Moses, way back in [Exodus 19:5-6].

This was for the nation of Israel and ‘NOT’ for the Body Of Christ as many think and teach today.

The Body of Christ was an “unrevealed mystery” at that time, an understanding that we get ‘only’ through Paul the apostle.

We have no business coveting, that which belongs to Israel, which we will address in the articles [Crumbs] to follow.

Israel The Called Ones

Israel were the ones who were called to be a light to the Gentiles, and be God’s salvation “unto the end of the earth” [Isaiah 49:6].

They were the chosen nation to evangelize the entire globe according to the prophetic utterances of the Old Testament prophets.

So coming back to Jesus Christ and His eleven around Him:

Remember, though Jesus Christ has risen from the dead, He still stands rejected as the Promised Messiah by Israel.

“Go ye therefore, and teach all nations, baptizing them in the name of the Father, and of the Son, and of the Holy Spirit”.

“Teaching them to observe all things whatsoever I have commanded you”.

And then Jesus Christ gives them an infallible promise of assurance:

Now “preach the Gospel” has not been specifically mentioned in the above Scripture, so we’ll have to go to Bro Mark.

The Commission According To Mark

Looking at [Mark 16:14-16], we find these eleven disciples of Jesus Christ are still having issues with their belief system.

Here is how the Amplified Version puts it, keeping in mind that the resurrection has just taken place:

“Later, Jesus appeared to the eleven [disciples] themselves as they were reclining at the table”.

HE is not exactly pleased with them.

“And He called them to account for their unbelief and hardness of heart”.

“Unbelief and hardness of heart”, has always been mankind’s greatest tragedy and is still so today.

And here the LORD Jesus now gives them the reason why:

“Because they had not believed those who had seen Him after He had risen [from death]”.

Jesus Christ here is referring to the two disciples He met on the road to Emmaus.

This wonderful and detailed Glorious account is graphically recorded in [Luke 24].

[Take some time off here for a while and read this account for yourself].

However, the Lord proceeds to give them their mandate and commission.

And like the earlier Scripture in Matthew, this commission was to be extended to the whole nation of Israel according to [Isaiah 49:6].

The LORD said to them, “Go into all the world and preach the gospel to all creation”.

The BIG question here is, “which Gospel were they to preach to all creation”?

It certainly could not be Paul’s Gospel of Grace.

Paul the apostle won’t be coming into the picture till about seven years later at this point.

So the Gospel that they were to preach was the same one that Jesus Christ preached during His earthly Ministry.

In fact, it was the only one at the time, “The Gospel of the Kingdom”.

After John the Baptist was put into prison in [Mark 1:14-15], “Jesus came into Galilee, preaching the gospel of the kingdom of God”.

“The time is fulfilled”, HE said, “and the kingdom of God is at hand: repent ye, and believe the gospel”.

What was this Gospel that Jesus Christ asked them to believe?

Jesus Christ had come to set up the Kingdom of Heaven on earth. He was their promised Messiah that all the prophets had spoken of.

Israel’s moment had arrived. Jesus Christ of Nazareth was indeed the One promised and that’s what they were called to believe.

Thou Art The Christ

This is what Israel as a nation was being called to believe, along with being water baptized for the remission of their sins.

Jesus Christ had not gone to the cross yet.

This was the Gospel of the Kingdom. And we find this Gospel theme running consistently through Matthew, Mark, Luke and John.

This Kingdom Gospel with its confession of faith goes even beyond the cross, the resurrection and the ascension.

This was the Gospel they were supposed to take out to the world according to their ‘Great Commission”.

But we know they could not carry out this “Great Commission” because Israel rejected Jesus Christ as the Messiah.

Salvation had to come first before The Kingdom could be set up.

That does make sense, doesn’t it?

God can’t have the unsaved entering into His Kingdom.

“He who has believed [in Me] and has been baptized will be saved [from the penalty of God’s wrath and judgment]; but he who has not believed will be condemned” [Mark 16:16]

Remember that the Gospel of the Kingdom was “under the Law”.

The great instruction regarding the “Great Commission” is being repeated again by the Resurrected LORD in [Acts 1:4-8].

The eleven disciples are asking the Lord Jesus, “wilt Thou at this time ‘restore again’, the kingdom to Israel”?

Israel had enjoyed this political kingdom at one time under King David and King Solomon’s reign.

But they had lost it due to their disobedience and stiff-necked attitude.

So God had to send them into dispersion and scatter them all over the world.

And now they were not to know, “the times or the seasons which the Father hath put in His Own power”.

But they were to now wait in Jerusalem for the promise of the Holy Spirit.

“Ye shall receive power, after that the Holy Spirit is come upon you”.

Once the Holy Spirit empowered them, they were to go to their own ‘first’.

“Ye shall be witnesses unto me both in Jerusalem, and in all Judaea, and in Samaria”.

And then they were to go, “unto the uttermost part of the earth”.

After this final instruction, Jesus Christ ascends in Glory back to Heaven. HE takes His place and position at the Right Hand of God the Father.

Christ’s Mission on earth was successfully and perfectly finished. The disciples followed by nation of Israel were now to be His extended arm.

They were to carry His banner forward, if they could believe on Him.

Then, “Greater works than Jesus Christ they would do”, was what HE told them, “because I go unto my Father” [John 14:12].

And these signs would follow them that believe according to [Mark 16:17-20].

In HIS Name they would cast out devils; they would speak with new tongues, that is, [known languages].

They would take up serpents; and if they drink any deadly thing, it would not hurt them.

They would lay hands on the sick, and they would recover.

After the Lord had spoken these things to them, he was received up into heaven, lining up with [Acts 1:9].

That is where He sits today at the Right Hand of God.

All this was going to part of their Great Commission.

And to a certain extent they carried out this commission. The nation of Israel could visibly see this extended arm of Christ’s earthly ministry.

God waits on them for the next seven years, trying to get the nation as a whole to the place of belief.

But did it lead to their belief? Unfortunately it did not.

Their ultimate response to all this was the stoning to death of Stephen.

The promised Kingdom on earth was conditional; it was subject to their belief, nationally.

On this occasion, this was going to be futile.

What started with Peter soon after Pentecost, ended with the stoning of Stephen in [Acts 7:58-60].

The “Great Commission” which belonged to the nation of Israel, could not be fulfilled at this time.

Israel as a nation, till today, stills stands in unbelief.

Will the Jews ever fulfill the Great commission according to Jesus Christ’s instructions?

Yes they will. It must be so, for HE spoke it. Hence it must come to pass.

Stay tuned for PART #02 of this series coming shortly.