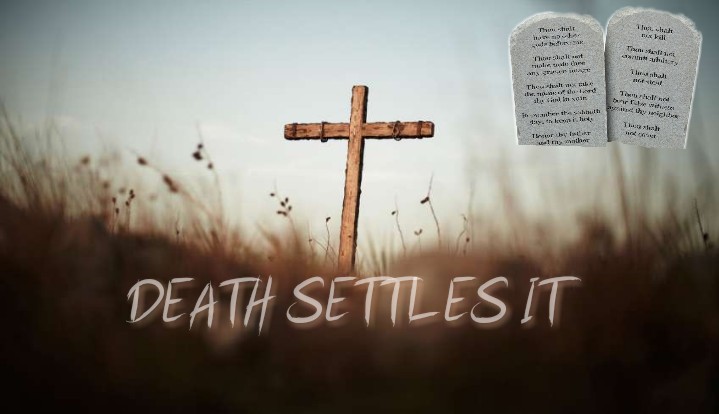 “To be saved by one’s own death is probably a very strange and odd statement to make”.

However, a great truth is that, it is in this death that we will find and have eternal life .

“Man, on account of sin, owes to God what he cannot repay, and unless he repays it, he cannot be saved”.

This is a hard saying, quoted by a well-known contemporary Bible scholar,

It is the predicament of every single human being and is a clear-cut case of utter hopelessness.

This hopeless condition has for us just one guaranteed destination, and that is the place of eternal doom. This is the “bad news”.

Now religion, in all its shapes and forms, tries to tell us otherwise, deceptively attempting to show us escape routes.

We can never be saved by religion, for it neither has the power nor the ability.

And these so called routes are cosmetically packaged with a divine flavour, “Having a form of godliness, but denying the power thereof” [2 Timothy 3:5]. They are all futile..

Paul, our ‘designated’ apostle for this age of Grace, strongly warns us, “from such turn away”.

The Law Declares Us Guilty

Scripture shows us that “The Law”, referring to the Ten Commandments of God declares the entire world guilty before HIM.

Although given to the Jew on “cold tables of stone”, it yet reached out to the whole world [Romans 3:19-20].

The Law is the eternal Mind of God that has been revealed to mankind.

They are righteous, they’re holy, and they’re eternal.

And this Law has demands which are impossible for us to meet because of that inherent ‘sin nature’ which we all possess.

Paul then goes on to show us, that by the keeping of the Law, we yet could NOT be saved.

For the law had no saving or redeeming power. He then tells us the astonishing reason why: “for by the law is the knowledge of sin”.

And this was the sole and whole purpose of the Law. It was to show up the utter sinfulness of sin, that fallen sin nature, which we all have inherited from Adam, after he fell.

And so the demands of the law were going to be binding on us.

They were going to be a heavy yoke on our necks, which we would not be able to bear [Acts 15:10].

All it could it do was constantly show up our fallen sinful nature and condemn us. We could not be saved by it.

The Law was literally a “sword hanging over our heads”.

How on earth could we be saved, delivered and freed from the draconian demands and bondage of the law?

Law Added To The Promise

Even though salvation was to come by promise given to Abraham by God, “the law was added” to that promise.

[Galatians 3:19] shows us that transgressions, caused by that inherited sin nature, was the reason for this.

However, Paul the apostle shows us, that it was only till when Christ Jesus would come into the picture.

And that moment was going to be referred to as “the fullness of time”.

For only Christ Jesus could totally fulfill the demands of the Law.

And this is exactly what happened as Paul graphically lays it out in [Galatians 4:4-5].

“But when the fullness of the time was come, God sent forth His Son, made of a woman, under the law”.

Yes, Jesus Christ was born and raised under the strict umbrella of the Law.

HE was not ‘born free’ like we are today.

Paul gives us the wonderful reason why, “To redeem them that were under the law……”.

So who were “them that were under the law?” The Jews, the Nation of Israel was.

It was always “Jew first”, and we should not have a problem with that, if we understand what was to follow.

The apostle Paul, addresses that very point, “that we (you and I) might receive the adoption as (what?)…….sons”.

God was making a way for us to be saved.

God had all this wonderfully planned for each one of us to be saved individually, at some point way back in eternity past.

Jesus Christ was going to come, and being sinless, would perfectly fulfill the demands of the Law on our behalf.

And after having done so, HE would then go to the cross, having been fully qualified to pay our sin debt.

This is exactly what Christ Jesus did, and the His resurrection after three days was the graphic evidence of this ‘finished work’.

HE did all this on our behalf, so that we could be saved and “delivered from the law”.

This may throw a curve at many, but “so saith the Scripture” in [Romans 7:6].

However, let’s take this a step further, so that we may get a clearer picture.

If we are going to come out of those demands of the Ten Commandments, hanging over our head, there is only one way that we can do so.

Yes, that is absolutely correct as we emphasize once again according to Scripture, “We’ve got to die”.

Paul our apostle explains this perfectly using as an analogy the civil law and a legal marriage relationship in [Romans 7:1-3].

“KNOW ye not, brethren (talking to believers), (for I speak to them that know the law,) how that the law hath dominion over a man as long as he liveth?”

We live under the government, and the Constitution of our nation. And that constitutional law is over us, and will control us till we die.

But the moment we die, the government loses all control.

They can’t do anything to a dead person.

Now that’s what Paul is driving at.

A man on trial in a court of law can be guilty without any shadow of doubt.

But if he dies before the verdict is given, the trial is over because death has ended the whole thing.

And here Paul is using this same analogy, as we come to a marriage relationship under the civil law of the land.

A husband and wife are bound by the civil law of the land. The woman is not free to marry another man so long as her husband is alive.

But should her husband die, she is then free to marry whosoever she wishes without being labeled as an adulteress.

This is a good place to note that the word ‘sin’ means ‘sin nature’ and not ‘acts of sin’.

‘Sin’ is often scripturally referred to as the “old man” or “old Adam”, or the ‘flesh’.

They all essentially mean the same thing, which is that inherent “fallen and sinful nature” we all are born with.

We’ll do no violence to Scripture if we replace the word ‘sin’ with ‘old Adam’, for the purpose of understanding.

SO we’ve got to die in that “old Adam” and this death must be by “crucifixion”.

Now we are not dealing with the physical here, but with the spiritual.

SO this “crucifixion” takes place the moment we believe in the Gospel of our salvation [1 Corinthians 15:1-4].

For when we do, we place our faith in the death burial and resurrection of Jesus Christ, Who has it done all for us.

The moment we believe the Gospel, that “old Adam” is crucified and is dead in the eyes of God.

And now the Ten Commandments ‘no longer’ hang over our heads.

The ‘old man’ has been crucified and has been broken from the demands of the Mosaic Law [The Ten Commandments].

And most people do not know that this verse is in their Bible.

However, we don’t leave it there, but pick up a new relationship, now with Christ Jesus our Creator, under His umbrella of Grace.

This is a “no condemnation” relationship.

We are no longer enemies of God, by virtue of our sinful fallen nature [Romans 5:10].

For God has saved us and reconciled us back to Himself.

How wonderful and how marvellous that is!

It is a Scriptural fact that the lost person is under the demands of the Mosaic Law, the Ten Commandments.

The lost person whether he wants to admit it or not, is under the very anathema of God, when they do anything that is contrary to the Law.

HE can claim to be anything, but those Commandments of God are still hanging over him.

He cannot escape it, and one day when he comes before the Great White Throne, he is going to be judged according to that Law.

But here’s the thing, no one needs to stay lost. Nobody needs to go before that terrible Great White Throne judgment.

For Jesus Christ has hewn out of that cold hard rock, a pathway of Grace leading to the eternal Glories of Heaven.

Jesus Christ, the very “Epitome of the Law”, had to go through a metamorphic change.

He did this by going through the extreme refining heat and fire and pressure of the cross.

Having done so, HE came out on the other side as the “Epitome of Grace”.

Talk about a fiery trial!

This is beyond our human comprehension! How do we describe this?

But that is exactly what happened!

Now, this very Person of Amazing Grace is reaching out ‘unconditionally’ to “whosoever will only believe”.

Paul is dealing with breaking the relationship with “old Adam” who has to be crucified not by anything we do.

We can’t crucify ourselves, and that is probably one reason The Lord chose crucifixion rather than any other form of death.

Because that’s one form of death that man cannot accomplish on his own.

We cannot crucify ourselves; we can’t drive the nails into our hands and put the pole up in the air.

Somebody from the outside has to do that.

So we believe that was one reason that crucifixion was the death of choice to carry through this whole theme.

That as we are crucified with Christ it is nothing we can do.

We cannot crucify ourselves. It is wholly, totally, and completely a work of God on our behalf.

So now with “old Adam”, that “sin nature” of ours, which God now sees as crucified, we are “delivered from the law”.

Hence now Paul says, we are able to “serve in the newness of the spirit”.

And this is where Paul throws up his third “what shall we say then?” question.