“When The Bough Breaks, The Cradle Will Fall. And Down Will Come Baby, Cradle And All.”

Has this happened in the United States of America today? Has the bough broken? God alone only knows, but the world right now is abuzz.

There is no shortage of opinions, millions of them coming in from three hundred and sixty different directions into DC.

The USA, in recent times has seemingly been the central focus in the world, especially since the November 2020 elections.

The bough of extravagance, of all that hype and expectations displayed, seems to have gone up in a puff of smoke.

So-called prophecies, claimed to be “God has shown/spoken to me”, has also gone up in a puff of political smoke.

The bough of so called man-made prophecy has snapped.

These man-made predictions based on ongoing current events and speculative foresight, have been propagated as divine prophecies by people in Christendom.

What a sham! And what a shame, marring the simple and true face of Christianity.

The so-called prophetic pundits the world over have suddenly gone “prophetically silent”, having falsely raised the hope of millions.

The bough of their self proclaimed prophetic ministries have have fallen too.

The faith of many could well have been shipwrecked.

Their convincing prophetic utterances have failed and now the devil’s enjoying a well-roasted, tasty Peking duck dinner. Could well be his last meal though.

For we know that Christ Jesus, on that cross has already broken his bough.

But we’ll address these in a few moments further down this Crumb.

With deception operating at its peak in human history in these times, everything seems to be a “Babel of confusion”.

Is what has just happened recently “shell shock surprising”? Not at all.

It’s certainly not to God and those who even remotely understand His agenda and plan for the ages.

Jesus Christ is in absolute control of His Agenda. His bough still stands strong.

This is not about America or China or their political leaders. What is happening out there is not political, it’s Biblical.

This is about Jesus Christ the Sovereign God and His plan is right on schedule.

HE cannot be manipulated nor have His Arm twisted by us fallen men. He is immutable.

God, as Sovereign as He is, has let men and nations exercise their free will.

And yet here we are, as close as we can tell, six thousand years from the creation of man’s beginning.

Everything from that time till this very hour has fallen right in place according to God’s timetable.

How God does that without making us human beings simply robots is way beyond our so-called intelligence and understanding.

Everything that was ‘Biblically’ prophesied concerning the end time, we can now see that they are falling into place.

And it’s all according to His timetable, and yet He has never made men or governments just robots.

However, since we know that God is not the author of confusion, we also know where it’s really coming from.

This statement is not one of personal opinion, but a Biblical one.

Nailing It On The Head

Paul the apostle nails it on the head with ‘zero error’ precision, with this revelatory statement from the Holy Spirit:

He continues, “that in the latter times some shall depart from the faith, giving heed to seducing spirits, and doctrines of devils”;

“Speaking lies in hypocrisy; having their conscience seared with a hot iron”.

Are we seeing this happening all around us in these times? Judge for yourself.

“This know also”, Paul sternly warns us, “that in the last days perilous times shall come”.

And then he really lays it on without holding back.

“For men shall be lovers of their own selves, covetous, boasters, proud, blasphemers, disobedient to parents, unthankful, unholy”.

“Without natural affection, trucebreakers, false accusers, incontinent, fierce, despisers of those that are good”

“Having a form of godliness, but denying the power thereof”. Paul then strongly exhorts us, “from such turn away.”

We can rest assured that “QANON” is not exactly a conspiracy theory. Much of what it claims it’s fighting against is happening!

The closing statement in the book of [Judges 21:25] is this:

“In those days there was no king in Israel: every man did that which was right in his own eyes.”

Once again, are we seeing this happening all around us in these times? Or are we really that blind?

Every man doing that which is “right in his own eyes.”

As lawlessness abounds more and more, we see men becoming a law unto themselves. It’s happening in just about every nation.

You know we love democracy, absolutely we do. But when it comes to getting things done, it’s the most inefficient government that man ever dreamed of.

And yet, we can see that prophetically the world has to come to the place where we are this moment.

The evidence is blatantly all around us, and we need to come to grips with this fact.

The reality of this fact is that things are only going to get worse.

It’s a downward trend, the pace picking up leading rapidly to the end of this age of God’s saving Grace.

The door of the ark is fast beginning to close. Get in there while you can or we’ll be forced to dance to the devil’s tune against our will.

For the bough of life will break and the cradle of man will fall.

Yes, we are talking about laying hold of the saving Gospel of Grace of Jesus Christ before it gets too late.

It is our “only Hope”. And this bough of hope will never fail.

Beware Of The Modern Day So called Prophets And Apostles

The framework of Christendom is sadly, just about saturated with this so-called “prophetic ministry”.

It is lined with deception and its agenda is nothing short of self-glory and personal gain.

John the apostle, though writing to the Jews, his warning is very apt for us today in [1 John 4:1].

“Beloved, believe not every spirit”, John admonishes us. He then tells us, “but try (or test) the spirits whether they are of God”. This means that we need to spiritually discern, which is the greatest need of the hour. And then he gives us the reason why “because many false prophets are gone out into the world”.

This warning came then, shortly before the turn of the first century. How much more then do we suppose it’s there today?

And the call for us today is to be discernably vigilant, more than ever before.

“To prophesy” in the “Body Of Christ” does not mean to tell of future events. God has already done that. We don’t get to add to it in any shape or form.

God has revealed all He had to reveal and it is complete. That’s it!

SO when we prophesy today, we simply speak forth “dispensationally” that which God has already spoken through His revealed written Word. Period!

The following Scripture in [Ephesians 4:11] spoken by Paul the apostle has been badly taken out of context manipulatively.

“And he gave some, apostles; and some, prophets………”

Here Is A Hard Truth

Anyone today, irrespective of who they are, who claims to be a prophet of God, “is false”. Period.

“God has spoken to me and shown me”, is one of the most dangerous statements we hear today. BEWARE!

Allow us to show you why. Consider the following:

The Role Of Prophets In The Body Of Christ

The role of those prophets in the Scriptures above was not to foretell the future. That is unfortunately where Christendom has gone very badly off track.

When Paul the apostle of the Gentiles started his ministry, it was in about 40 AD. Remember that Paul was Personally Hand-picked ‘by’ the Ascended Lord Jesus Christ in Glory.

And Paul received all his revelations directly ‘from’ the Lord in Ascended Glory [Galatians 1:11-12].

When Paul wrote his first letters, it was to the Thessalonians in about 56 AD.

So here was this 15-16 year gap, since he started his ministry.

For those first 15-16 years of his ministry, Paul was busy establishing little congregations of Churches in different places.

During this period there was no “written Word”.

So how did those congregations get fed? They did not have New Testament Bibles like we have today.

It was through “gifted men”, operating in that New Testament, Body Of Christ, office of prophets.

These gifted men would proclaim the Word of God they had heard from Paul, as he received them from the LORD.

Timothy was one such person. It was not for telling future prophetic events. They had no such prophetic utterances.

This may be hard, but it is the truth.

But ever since the completed revealed and written Word of God came into existence, this office of the prophet ceased to exist.

Today we have the full and written revealed Word of God for and to the “Body of Christ”, the Church.

And this complete revealed Word for us is from Romans to Philemon. Nothing more can and needs to be added to that.

We dare not. It’s complete!

We do hope you get this.

Lies And Deception Can Never Change The Truth

With all the lies and the deception that is glaringly around us, the TRUTH of God’s Word still stands strong.

The Truth of the Gospel still stands unwaveringly unmoved.

There is not a power in hell that can shift it.

God’s unconditional call to us is still very much valid with His arms still wide open to “whosoever” will come.

Jesus Christ still echoes the message of Calvary as it rings out to the uttermost corners of the earth:

“I have legally and judicially cleared the path for your eternal freedom. Heaven with all its hosts eagerly awaits to rejoice the moment you say, ‘yes LORD, I believe’. That’s all”

“Remember, I AM not dead anymore. I AM alive and well and will see you through to the end. That is a guarantee!”

“When we place our faith in Christ Jesus, every year is a year of breakthrough.

Every day is a new day for new opportunities to get it right, and every chance is a second chance. There is ‘never’ a last.

Every moment is a moment of unfailing Hope!

YOU ARE ON GOOD GROUND INDEED!

Blessed Be The Name Of The LORD 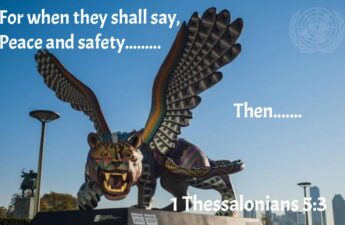 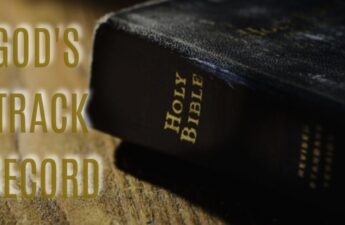 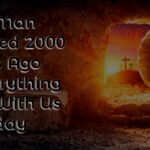 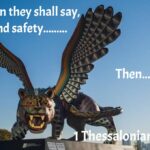 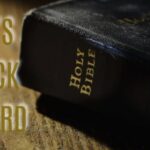