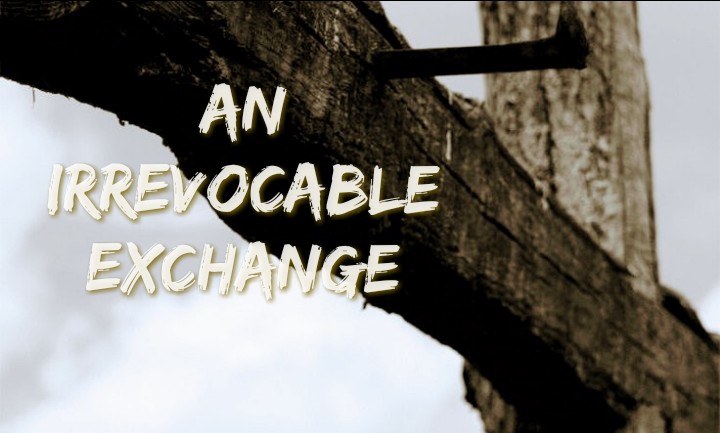 “JESUS CHRIST, the Architect of the universe created a “PATTERN” in order to bring about salvation for the whole fallen human race”.

And everything from from eternity past to eternity future would be authored and finished “According To The Pattern”.

For salvation in this Age of Grace that we live in, God has given us a pattern too.

“The children of Israel had not long come out of their four hundred year Egyptian bondage”. They were breathing the fresh air of freedom.

Four hundred years they had been in bondage and slavery under the draconian thumb of the Egyptian Pharaoh. It was a long time before God heard their cry.

The hour of deliverance had arrived for the children of Israel to be freed from their bondage.

For that night a death plague was to pass across the land of Egypt, smiting every first born of man and beast.

According to the instructions given by the Lord, lambs’ blood was applied to all the door posts and lintels.

The death plague would then “pass over” these houses in Goshen where the blood was applied, without destroying them.

This day of redemption was a prophetic representation of our salvation today.

By this time, the population of Israel had grown to about three to five million .

They had originally started out being seventy in number when they first came to Egypt [Exodus 1:5].

God had promised Jacob, that He would make them a great nation in Egypt.

God had also promised that He would deliver them from bondage and bring them to the “promised land” [Exodus 6:2-8].

The fulfillment of this promise had begun.

That night, standing with their loins girded, feet shod and staff in their hands, they partook of the Passover supper.

Notice that their physical position was “standing” as they ate the Passover supper [Exodus 12:11].

They were ready to go and go they did.

With a Mighty Hand and an outstretched Arm, God, through Moses had miraculously delivered them to safety.

We all know the famous Red Sea crossing account.

There were mountains on either side of them, the enemy behind them and the Red sea in front of them.

With nowhere to run, God sends an east wind and miraculously parts the Red Sea for them to cross over.

They were never going to see the Egyptians again just as God had promised.

“Fear ye not” was the admonishment.

“Stand still, and see the salvation of the Lord, which he will shew to you today” Moses told them.

“For the Egyptians whom ye have seen today, ye shall see them again no more for ever” [Exodus14:13].

And as Pharaoh’s army tried to follow them through the sea, it closed in on them and they all perished.

They were free at last.

A Sanctuary In The Wilderness

Led by a cloud by day and a pillar of fire by night, God was taking them on a journey.

It was a journey through the wilderness to the “good land” as promised in [Exodus 3:8].

God wanted to dwell in the midst of His people.

So after dispensing the Law at Mount Sinai, the Lord spoke with Moses.

“And let them make me a sanctuary; that I may dwell among them” [Exodus 25:8], giving him all detailed instructions and the blue print for this sanctuary in the wilderness.

With Moses in charge, God commanded him to make it explicitly “According To The Pattern” [Exodus 25:9].

Everything relating to their sin, sacrifices, salvation, manner of living and worship was to be “according to this pattern“.

In order to give it mobility during their wilderness journey, this sanctuary was made of tent materiel.

Later on down the line it would become a brilliant piece of architecture, a temple made by their skillful hands.

The building of the temple was accomplished and fulfilled during the days of King Solomon the son of David.

But King Solomon, a man saturated with the wisdom of God and widely known for this great wisdom, knew better.

On the day of dedication of the temple [1 Kings 8:27], Solomon prayed, “But will God indeed dwell on earth?”

“Behold, the heaven and heaven of heavens cannot contain thee: how much less this house that I have builded?”

King Solomon knew that in reality God could ‘never ’ reside in a temple made by human hands. Man was a fallen sinful creature.

So, beautiful and stunningly brilliant as this temple was, it was still temporary like the tent in the wilderness.

It was still but just a shadow of the real thing to come.

All the ordinances relating to their sin, sacrifices, salvation, manner of living and worship remained unchanged. Everything was still to be “according to the pattern”.

This was all under the umbrella of the Law, until the appointed time for Grace.

The Arrival Of Grace

The hour of Grace had arrived as we enter into the Gospels of Matthew, Mark, Luke and John.

“For the Law was given by Moses, but Grace and Truth came by Jesus Christ” [John 1:17].

A fulfillment was taking place with Jesus Christ’s first advent.

“God sent forth his Son, made of a woman, made under the law”.

A shift was beginning to take place. The God of Abraham, Isaac and Jacob, Who spoke to Moses out of the burning bush, was doing something new.

“To redeem them that were under the law, that we might receive the adoption of sons”.

The temple sacrifices and practices were still going on “according to the pattern”. That part had still not changed.

But it was going to, because the “one time all-sufficient Sacrifice” had actually and finally arrived on the scene.

Jesus Christ was already at some point in eternity past, Sovereignly set aside to be that Sacrifice [1 Peter 1:19-21].

HE was the “Lamb without blemish and without spot”:

“Who was verily foreordained before the foundation of the world, but was made manifest in these last times for you”.

“Who by Him do believe in God, that raised him from the dead, and gave him glory”, says Peter.

He then goes on to give us the reason why, “That your faith and hope might be in God”.

[Revelation 13:8] similarly refers to Jesus Christ as, “the Lamb slain from the foundation of the world”.

Christ Jesus The Fulfillment Of The Law

“I am not come to destroy, but to fulfill”.

Jesus Christ, being born absolutely sinless was the Only One capable of fulfilling the Law.

God Who is “Spirit” cannot replace man or take the place of man, who is “flesh”.

In order for God to replace “flesh”, He had to first become actual “flesh”, a man.

And this “flesh” had to be “innocent flesh”.

Only “innocent” can replace “guilty”…… Think about that for a moment!

This may sound like a play of words, but it’s the absolutely truth.

Try it with “righteous” and “unrighteous”.

Only “righteous” can replace “unrighteous”.

Take your time! Let this Truth really sink in!

“IT’S WHAT JESUS CHRIST, A FRIEND OF SINNERS, IS ALL ABOUT”.

By a Judicial and Irrevocable Act of the Sovereign God, this Divine Exchange took place on the Cross Of Christ.

His “Sinlessness” replaced our “sinfulness”,

We can keep going and the list will be endless! These far reaching depths of the Cross are beyond our human comprehension.

“O the depth of the riches both of the wisdom and knowledge of God!” he exclaims.

“How unsearchable are his judgments, and his ways past finding out!”

“For who hath known the mind of the Lord? or who hath been his counsellor?”

Having fulfilled the Law to perfection, Jesus Christ could now be that “one time, all sufficient Sacrifice”.

What a Saviour we have indeed!

Jesus Was God In The Flesh

“And without controversy (no room for debate or argument) great is the mystery of godliness”.

Paul then goes on to give us six indisputable facts:

It’s what the Glorious Gospel is all about.

Paul The Apostle, The Pattern

Paul the Apostle is the pattern for our eternal salvation today. He is the first member in the “Body of Christ”.

Paul gives us “a faithful saying and worthy of all acceptation” in [1 Timothy 1:15].

“That Jesus Christ came into the world to save sinners; of whom I am chief”, says Paul.

The word “chief” here, he means that he is “first in the line”. No doubt he was the worst too, considering all he had done in persecuting his own fellow Jews [Crumb 0051].

He explains that in [verse 16], “Howbeit, for this cause I obtained mercy”, he says.

“That in me ‘first’ (first in line) Jesus Christ might show forth all longsuffering”.

Now here it comes, as he lays it on the line:

“For a (what?) ‘pattern’ to them (you and me) which should hereafter believe on Him to life everlasting”.

That is why Paul the apostle with a clear conscience can confidently tell us, “Wherefore I beseech you, be ye followers of me” [1 Corinthians 4:16].

Paul the Apostle is our explicitly “designated pattern”, by the “Ascended Lord Jesus Christ In Glory”.

Jesus Christ died for our sins, He was buried and rose again for our justification [1 Corinthians 15:1-4] and [Romans 4:25].

It is the glorious Gospel.

And when we, with our heart, believe it + nothing else, it is “According To The Pattern” today.

God can only dwell in a building or a temple made “without” human hands. So HE must be the builder. Only then can He dwell in that building.

The moment we believe in the Gospel, we become that ‘building’ and that “temple”.

“Therefore if any man be in Christ, he is a new creature: old things are passed away; behold, all things are become new”.

“Ye are God’s building”, Paul categorically tells us in [1 Corinthians 3:9]. 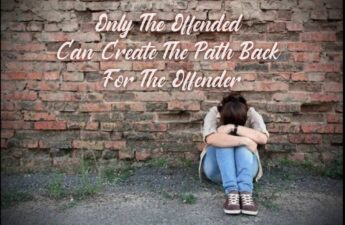 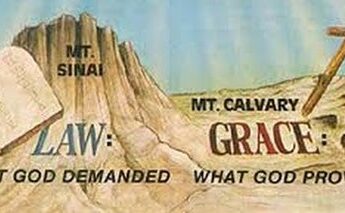 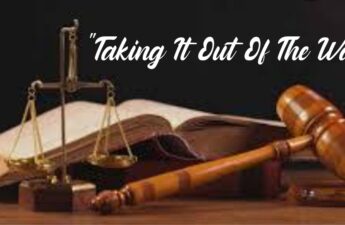 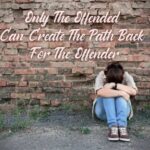 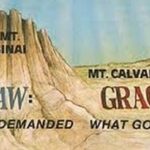 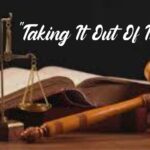