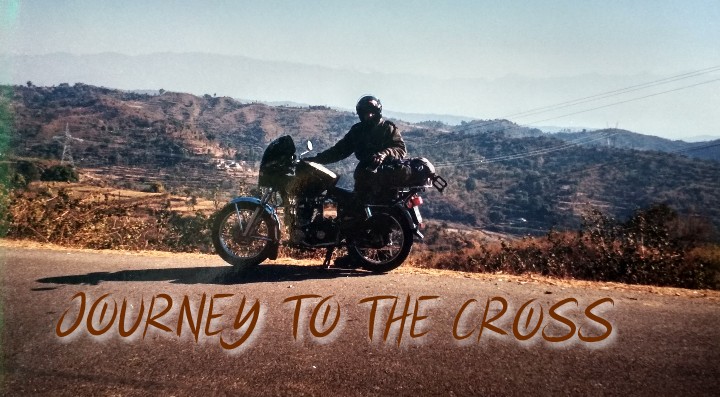 “It was a beautiful Friday morning on the 26th of January 2001, nineteen years ago.

My home nation of India was gearing up to celebrate her 52nd Republic Day.

This was the day when the Constitution came into effect in 1950 and India turned into a newly formed republic.”

This was the same day that India was hit with her worst ever earthquake in the state of Gujarat. Close to 7 on the Richter Scale, it caused unprecedented damages.

Little did I know, that on this day, I was about to undertake a journey, which would radically change my life forever.

And little did I know, there was a mighty earthquake coming into my life too.

A shaking that would totally and completely break me down, strip me of everything, and bring me down to my knees.

Being a keen motorcyclist, I was for the first time, about to take on a solo ride, across the entire sub-continent of India.

The relative sponsors were in place and the route was planned, as I got ceremoniously flagged off from the south eastern coastal city of Chennai.

I was to cut across to the western coast, and then head right up to the northern mountains of Leh and Ladhak.

I would then head southbound straight down a middle highway, before getting back to my starting point and base in Chennai.

Everything was going along pretty smoothly, till I reached about half way point down on my return journey.

Taking a hard and sharp left, in a hot, sunny and dry hilly wilderness, at about 95-100 Kmph, my rear tyre blew, resulting instantly in a crash that should have rightfully sent me into a lost oblivion forever.

But God was merciful.

I survived with just a broken left shoulder.

How It All Began

Brought up in a reasonable well-to-do family, with a decent education, I really lacked nothing in life.

Spiritually raised in a mainline denominational Church with all the ritualism of baptism and confirmation, life was moving along pretty well for me.

I left home at the age of 21 and headed to the land of UK to a start a life for myself.

Little did I know that it was not just home I was leaving, but I was leaving God too, what little I knew of HIM.

I was forsaking my so-called spiritual upbringing, to live out, taste and experience every ungodly temptation that the world had to offer.

This carried on, gradually increasing more and more with time, over the next 22 years.

I had lost the plot, as they say, and steeped deeper and deeper in to a life of sin of every kind.

My conscience seared as with a hot iron, I had reached a point of no return.

I was in total bondage in the hands of the devil, doing his bidding at his will.

There was no getting out of this, though I sought it with tears.

I was a slave to sin!

There is little, that can be more discouraging than a shattered dream.

What started as ‘self-glory’, ended in the pits. I had lost face.

So there I was in the middle of this state highway, in the midst of the wilderness, stranded for about five hours.

There was much to ponder about, much to reflect on, even though I suffered a broken shoulder and a broken spirit.

In the mean time, while all this was happening, the other side of my life was simultaneously coming to light.

I lost everything I had built and worked for. It was all taken away from me.

I HAD LOST ALL THAT WAS DEAR TO ME!

And there was absolutely nothing that I could do about it.

GOD HAD HAD ENOUGH!  My moment of chastening and scourging had arrived.

While trying to heal over the next couple of weeks, pride set in and I decided to finish my personal glory journey.

I was truly kicking against the goads.

Strapping up my broken shoulder, painful as it was, I set out to finish my journey on my motorbike, which by now had been repaired.

The Gospel Preached To Me

I rolled into the city of Hyderabad to break journey for a couple of days to meet a godly aunt, whom I hadn’t seen in twenty-five years.

With a prayerful burden in her heart, she gave me the Good News of the true Gospel of my Salvation, which I was hearing for the first time in my life.

How that Jesus Christ, the Son of God had Personally “died for my sins, was buried and rose again for my justification” [1 Corinthians 15:1-4] and [Romans 4:25].

It came with a wonderful Promise, “Whoever believes on Him will not be put to shame” [Romans 10:11]

I was a long tearful night that night.

But then, with a heart filled with thanksgiving and a wonderful ‘blessed assurance’, I set out early the next morning, in a bid to finish my journey.

It wasn’t long though, before my worldly sorrows and my predicament, started to viciously overwhelm me again.

When I reflect back, I realize it was the enemy at work, trying to steal that which Heaven gifted me.

Riding in the midst of another hot and dry wilderness, on National Highway 9, I started to shake and lose control.

That’s When It Happened

That’s it! I threw in the towel!

Another maximum sixty seconds and I reckon I would have been gone.

AND SUDDENLY! From out of nowhere, Heaven Came Down And Glory Filled My Soul.

I could feel it, being washed down from head to toe, from my shoulders and out through my fingertips.

In a moment of time, all my cares had gone, my burdens had been lifted.

I WAS FREE INDEED!

Although I did not understand it, yet I knew what was happening to me.

I was still riding, while all this was taking place.

I finally pulled up to the side, and without knowing it, I looked up to Heaven, and said, “YES”.

My worldly burdens were replaced with a Heavenly one.

I knew, in a moment of time, that I just had to preach ‘The Gospel of God’s Grace’.

That was to be my mandate for the rest of my life.

Turning Into The Home Stretch

As I turn into the home stretch of the final lap of my life, I look back with thanksgiving to God Almighty, Who saved me with a Mighty Hand and an outstretched Arm.

It’s been quite a journey so far as I cross the 63rd milestone with a sign-post saying, “KEEP GOING”!

So looking unto Jesus, Who is the “Author and Finisher of my faith” [Hebrews 12:2],

I press toward the mark for the prize of the high calling of God in Christ Jesus” [Philippians 3:13-14].

I close with the first ever poem I’ve ever written in these sixty-three years of my life, which sums it all up.

Driven by Love He came for me

While on a road to a lost eternity

Washed me, cleansed me, gave me His Robe

Now walks with me to my Eternal Hope

So vast His Love, upon me He set

Endued with Hope that will never fail

On the winds of Heaven I’ll forever sail

O listen! O man, He bids you to come

With open Arms He’ll draw you in

Put far away your deeds of sin

Nailed He forever upon that Cross

The devil has now no hold on thee

Today’s thy day, so it must be

I bid you with plea, Just believe in Me.